We are thrilled to have awarded the 2016 LT Valerie Cappelaere Delaney Memorial Scholarship to Army Captain Danielle (Jessica) Williams, who will be using the $4,000 towards earning her private pilot’s license. Doreen, Ceecee and I had the opportunity to travel to Nashville, TN on March 10-12 for the Women in Aviation International (WAI) conference, where we presented the award, connected with our 2 past scholarship recipients and other Navy girls, and even shared Val’s story as one of the educational breakout sessions. It was an especially memorable way to spend the 3 year anniversary of Val’s passing. 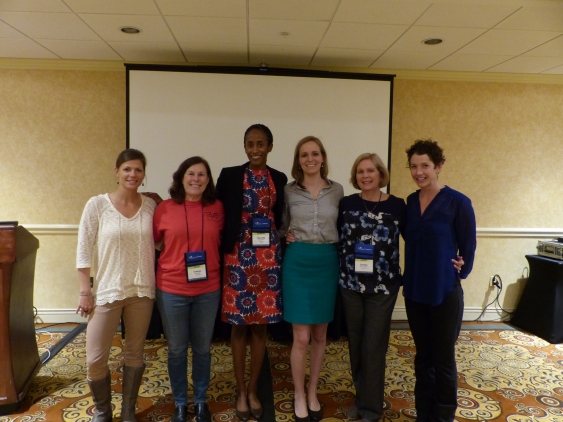 Danielle is the youngest of three daughters and a twin brother born to parents who both served in the US Army. She ran track, cross country and rowed during high school, then went to Harvard University on a 4-year ROTC scholarship and was commissioned as an army engineer in 2008. After having served as a platoon leader for a combat engineer company while deployed to Iraq and as a human resource manager for the entire battalion, she now serves as Team Leader for a Special Operations Civil Affairs team based at Fort Bragg, NC that is assigned to maintaining strategic relationships with the Armed Forces of Philippines. In 2011, Danielle went skydiving for the first time and found a new passion for human flight. Four years and over 400 jumps later, she took her first flying lesson in an airplane in January 2015 and is now on her way to completing her private pilot’s license with the goal of becoming a commercial pilot.

We are thrilled to welcome Danielle to our scholarship family, not only because she shares the same birthday month as Val (May 1986) but because she exhibits similar characteristics of hard work, perseverance, and a desire to empower other women to excel through participation in WAI.

Our two previous scholarship recipients, Chelsea and Ashley, also attended the conference and shared with us all the exciting things they’ve been up to in the past year. Ashley was even featured on the front page of a special edition magazine put out by WAI highlighting essays by scholarship recipients to celebrate giving out $10,000,000 in scholarships over the last 27 years. We are honored to know these amazing women and support them along their aviation journey in memory of our Val. It’s just one way that Val’s amazing legacy can live on. It’s what keeps us raising money for these scholarships so that women can soar!

I also had the privilege of presenting Val’s story during one of the breakout sessions and it was such a personal victory for me. I shared the story of the “wings for val” and used wings as a metaphor to give examples from Val’s life about how we all can find and use our own wings in life and approach any obstacle with an “adapt and overcome” mentality. We had a film team with us for an entire day, courtesy of our amazing friends at Mission BBQ, and we will be putting together some video snippets to share in the coming weeks.

And of course we enjoyed touring Nashville, sipping some fine Tennesee whiskey, eating amazing southern food, and splurging on some cowboy boots!!!!

So.. a third year has now passed and while I still miss my sister every single day, I am owning her story and legacy as part of my own and learning to be more brave and to love myself through the process (words from the great Brene Brown). I am channeling her words “adapt and overcome” almost everyday and am so thankful for the opportunities I have to continue sharing her story and inspiring the next generation of female leaders.

This site uses Akismet to reduce spam. Learn how your comment data is processed.